It feels weird to stay in a hotel which is just a hotel. The walls here are plain beige, there’s no hidden Mickeys to spot. The room is nice enough but it’s not the ridiculous level of luxury we had in the Disneyland hotel. When we walk out of the lobby there’s no Disney music playing, and there aren’t copious amounts of staff wishing us a good morning or waving at us with Mickey gloves or Disney plushies.

It’s amazing what you can get used to.

We had a slow start to the day Sunday, because Anna woke up in pain and needing painkillers and to sleep it off. I used the time to catch up on blogging and have a nice birthday morning bath.

We went to Doutor for breakfast, which has been my favourite breakfast spot in Japan since 2012. It’s a chain coffee shop, which prides itself on imported coffee. I’m not a coffee or caffeine drinker but they do a delicious, rich and not too sweet hot cocoa which is the stuff of dreams. The food is Western/Italian inspired. Lots of baked goods, sandwiches and pastries. Anna and I both had filled rolls and split an order of cheese toast. The cheese toast is delicious and may be all I eat for breakfast from here on in. 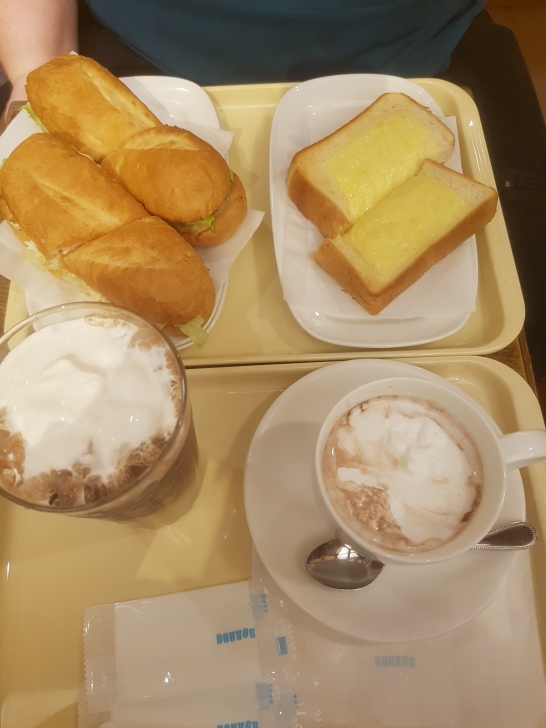 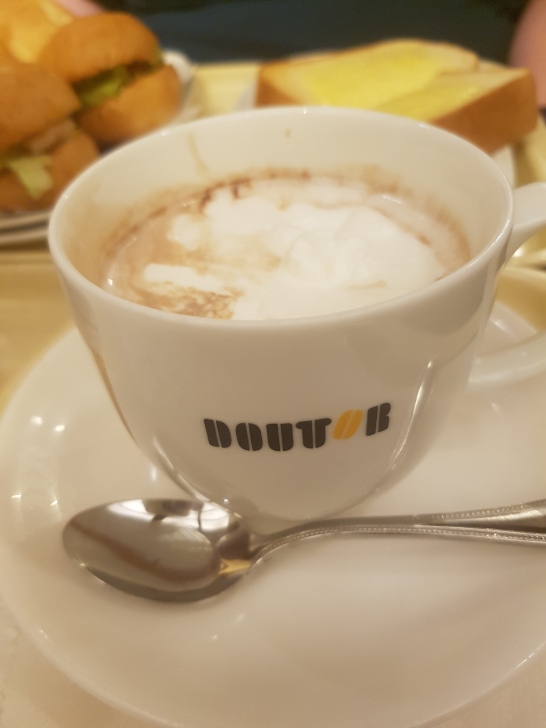 After doubling back to the hotel to pick up our rail pass vouchers we located the ticket office. This was a roundabout trip because they’ve split off the JR rail pass ticket exchange from the main ticket counter, but we happen to be staying very close to the offices we needed so it wasn’t too much of a drama.

The JR pass allows us to ride a bunch of the shinkansen (bullet trains) for free and most local rail as well. It’s super convenient and only available for tourists, so we had to show our passports. The system is very streamlined though, you join the queue and a staff member checks your vouchers, then gives you a form on a clipboard to fill in while you queue. She then checked we’d filled it all out correctly, so by the time we reached the front of the line everything was in order and the desk staff just had to issue the passes proper. It seems so obvious to have this level of service, a staff member checking on you as you wait, but I can’t think of a single place it happens back home.

Newly minted rail passes in hand we went into the station for our first trip on our beloved Yamanote line. The Yamanote line is a big circle which travels through main suburbs of Tokyo and we caught it a lot last time.

We got off at Harajuku and headed to Takeshita St. There’s some construction happening so things looked a little different on the approach. It turns out that Sundays at Harajuku are very, very busy. We hit a couple of favourite spots: Paris Kids for cheap jewellery and accessories, Daiso, a sock shop and wandered up looking for our favourite sushi place, Sushi-nova. Unfortunately it has shut down permanently 😦

Then we looked at some fantastic shoes, just gorgeous things and all relatively cheap, just to realise that they don’t make them quite big enough for us. I could get my feet in the glorious shiny hidden wedge sneakers, but only just. As I put my foot down I could already feel the squeeze, there’s no way I could walk in them comfortably for any length of time. It’s very sad. Plus there’s all this gorgeous fashion, a lot of it which Anna would love to own but it’s all sized to tiny Japanese teenagers. It’s quite alienating in a way. You can look at all the beautiful things, you can buy them, but you can’t wear them.

We found the shiba cafe I’d read about, but the return time on it was hours away. We found the gigantic rainbow candy floss place, and it had a huge line out the door. Plus the street, which is always pretty busy, was packed and mostly with tourists who weren’t picking up on the etiquette. The flow towards the train station/up the street is on the left and the flow down the street/away from the station is on the right. If you try and battle against the flow it doesn’t work. If you stop in a group and spread several metres into the flow to work out what you’re doing next, it messes the flow up. It was all very annoying.

Around the time we realised we couldn’t get into the shiba cafe right away I just kind of broke. Combination of PMS, exhaustion, disappointment and a little child me inside saying ‘but it’s my birthday!’ all welled up and I just started weeping. I’m sure part of this is also missing Disney, and being sad that Harajuku wasn’t exactly what I wanted it to be, and being away from home on my birthday. This is pretty embarrassing to write about, but the fact is that it happened, and I like to be honest about this stuff. I just started crying and Anna took us to a cat cafe where I calmed down some. 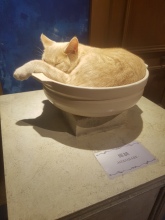 The Mocha cat cafe is one floor up at the top of the street, and the street slopes up so you can see quite a lot of the crowd from inside, and you can see the fluffy cat butts from the street.

It’s a really, really nice place. The rooms are spacious and quiet and vaguely Alice in Wonderland themed without using any of the trademarked material. The walls are dotted with cat platforms at various heights and little cubbies the cats can go to when they don’t want interaction. There were water fountains around the room, and lots of chilled out cats. They limit how many people can go in at a time, so when people come out someone new can go in. They also offer unlimited drinks from two huge vending machines. It had been a cold morning but it really warmed up while we were in Harajuku so I had two green melon fantas and an orange soda and still felt a little thirsty.

The cats were all exceptionally fluffy and very relaxed. They were playful, some of them very happy to chase the teaser toys provided, or nudge up against you or as one cat did to Anna, spend a while sniffing your feet. They had a few different breeds as well and we made friends with a squash nosed munchkin ginger. It was a nice place to chill out.

We headed back to Shinjuku on the train and it happened again, I was weeping. It just leaked out of me and I couldn’t stop it. Back in the hotel room I just let it happen and Anna reassured me that it actually made sense. I hadn’t thought of it in these terms but it was the first day we’d had in months where we didn’t have to do something. There wasn’t a schedule, I didn’t have to pack up or organise or be somewhere, we were just doing things as they happened. My mind was given a chance to relax, and all the stress and the emotions were coming out.

I felt a lot better after that, and decided to treat the rest of the day as a sick day. We sat in bed, drank sodas and juices and ate snacks and watched Brooklyn 99 which has apparently become comfort TV for me. After a couple hours of that I felt much, much better. We got laundry done and then I realised what I really wanted to do: visit Tokyu Hands and UniQlo

Conveniently, we’re staying about five minutes from a huge up market department store called Takashimaya Times Square, which includes a Tokyu Hands and a Uni Qlo.

What is Tokyu Hands? It’s a huge home and craft themed department stores. There’s a floor for kitchen including bento supplies, waffle makers, chopsticks and baking ware. There’s a floor for leather working and tools, there’s a floor for cards and gifts (we picked up some delightful Studio Ghibli mini jigsaws) and a whole entire floor of diaries, pens, stickers, washi tape and other stationary. That last floor was what got us. We spent quite a lot there. It was so much fun. They had all the 2019 diaries out, so there weren’t so many notebooks as there were last time, but we picked up … enough things. We found a wedding album designed to take instax sized photos, which is perfect because we had all our guests take photos of themselves with my instax, so we have a stack of pictures to store. They had a whole bullet journal section and Anna’s eyeing up a new one for next year, I’m considering trying it out, because with all the stickers etc it actually seems feasible for me.

We headed to UniQlo which is a clothing store which I adore. This one wasn’t a huge one, and I need a huge one, but it still had some gorgeous things. I tried on a rather fancy blazer which I’m thinking about. There were some very cute baby things and wool sweaters. They always have a Disney range as well, and usually some art and artist t shirts. This store didn’t seem to have them, so we’ll have to check out another one. Or maybe I’ll just wait until Osaka when we’re staying by the giant one … we didn’t buy anything there as we didn’t have our passports and you can get tax write off as a foreigner, but I’m keen to go back and check out some things.

After that it was a stroll back to the hotel, sort out hanging the still slightly damp laundry and another relaxing netflix and snacks evening.

Overall it wasn’t my best birthday ever, but it ended just fine. We’re here for a long time so that we can have restful days, I tried to fight it a bit, but I did need the rest.