Slept in a bit and then took a walk to Doutor for breakfast, I also managed to find a post box to send off some postcards in, so that was exciting.

Then we navigated the Osaka subway and got to Osaka Castle park. It’s a beautiful place. They were selling plants and bonzai off one of the paths. There was also an ice cream truck, so the first thing we did was get soft serves. I had chocolate and Anna had condensed milk strawberry. They were both very, very good.

It was a scorcher of a day, very hot in the sun, but sitting on the edge of a fountain, enjoying ice cream and people and dog watching was really nice. Calm. Nice get a little vitamin D without having to navigate a themepark or rush to get somewhere. 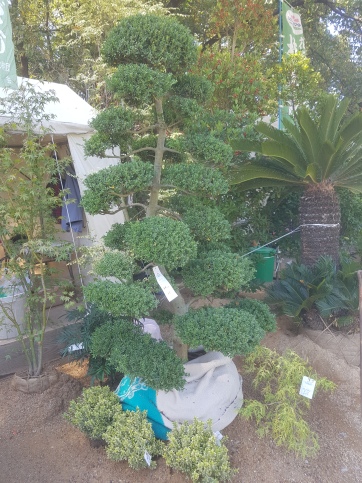 The walk up to the Castle’s main tower was quite steep and involved a lot of steps, so it stopped feeling quite so restful. However it’s might impressive up there, and worth the climb. 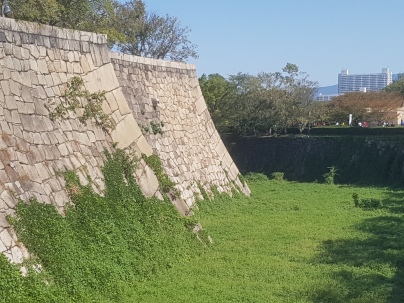 We didn’t go into the castle itself, we just sat in the courtyard and watched people again. Took in the beauty of the place, watched an acrobat couple do tricks to eighties music and soundtracks from Jurassic Park and drank apple juice. It was a very restful visit, up until a creepy gigantic beetle thing landed on my leg and we both decided it was time to move on. We walked down the other side. The moat is really pretty

After this we headed back to Shinsaibashi where I hit UniQlo and bought pants! That fit me! In Japan! and some great T shirts, and then we went back to the hotel for an afternoon rest.

For dinner we went back to Chibo Okonomiyaki and had a Hiroshima style one with crispy gyoza as well.

A word about Osaka – now, I love Osaka, but in a lot of ways it’s a different country to Tokyo. It feels like Osaka is the drunk uncle to Tokyo’s perfectly presented business person. Tokyo crowds are quiet, well behaved and no one ever bumps into you.

Osaka people act a lot more like New Zealand crowds. They’ll yell at each other, stop in the middle of the walk way and have arguments. The kids are much more likely to be crying and running away from their parents, something we almost never saw in Tokyo. People hoik and spit in the street, ride their bicycles through red lights and directly towards cars and people jaywalk all over the place.

Also we’re staying near Dotonbori which is a weird mix of great food, host clubs, strip clubs and pubs. We wander to and from dinner past signs which aren’t always clear what they’re advertising. Does that name indicate a regular pub, or somewhere you have to spend a lot of money for pretty boys to drink with you? or is it a nice place for food? We just don’t know.

The crowd thing is a little annoying but otherwise it’s great. Osaka is a lot of fun. It’s just so markedly different from Tokyo.