We started the day with the hotel buffet breakfast. I was pretty firmly up on the wrong side of the bed and cranky, which didn’t help when someone barged in on the line for the toaster.

The trip to Ōkunoshima involved four kinds of transport. Streetcar/tram from hotel to train station, shinkansen to Mihara, bus replacement instead of local train to the sleepy seaside town of Tadanoumi and then a 15 minute ferry to the island. 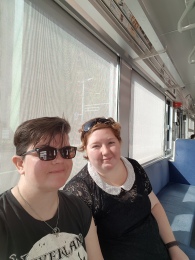 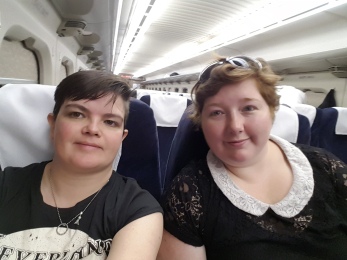 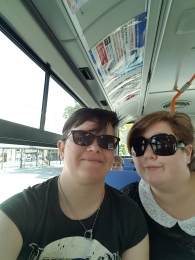 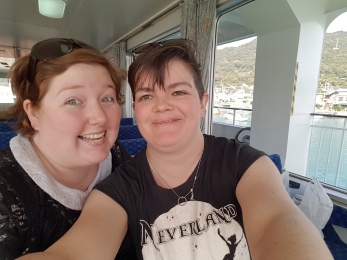 Ōkunoshima or, as it’s commonly known, Rabbit Island, has a dark past. It was a testing ground and factory centre for chemical weapons which were used by Japan in China during World War Two. The island is dotted with remains of factories, laboratories and a poison gas museum. However those were all closed up, which was good because we weren’t planning on exploring that history anyway. We went for the rabbits.

Stories vary on if the rabbits currently on the island are descended from the lab bunnies used for testing chemical weapons or if they are just other rabbits intentionally released on the island. Either way, the island is packed full of cute bunnies. 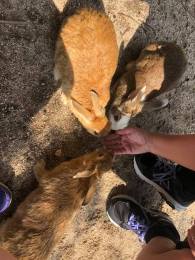 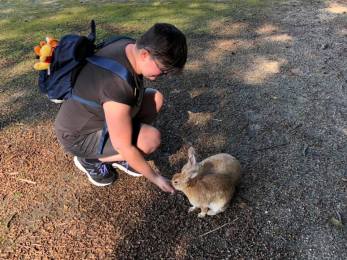 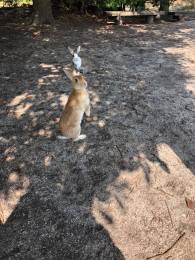 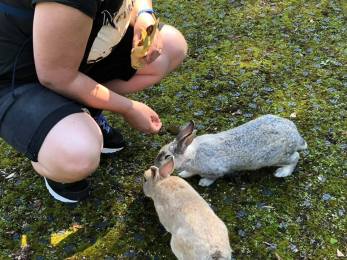 The place you buy ferry tickets from also sells bags of rabbit food, so we bought a pack each and hopped on the ferry. As soon as you get off the ferry, there’s rabbits.

They know which side their bread is buttered on. If you hang out near the boat where all the tourists get off, you will get fed. They know the sound of a paper bag rustling, they know the meaning of an outstretched human palm. They’re wild, but they’re a tame sort of wild. 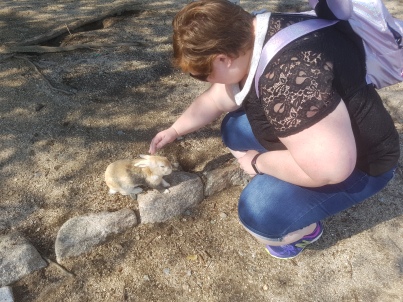 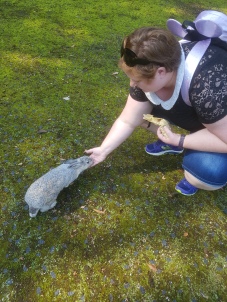 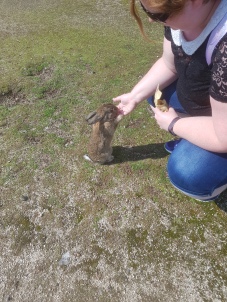 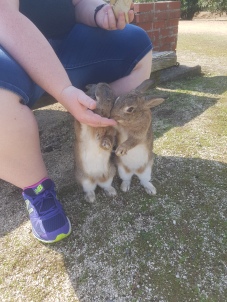 The rabbis were very good at showing you what they didn’t want. If they didn’t want a pat, they’d back away. There are walking trails around the island but there’s also a lot of dense bush, so if the rabbits don’t want to be around people they have so much space to fall back to. 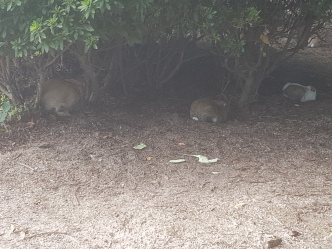 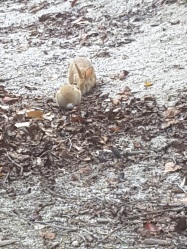 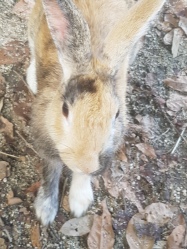 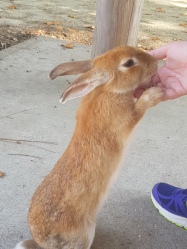 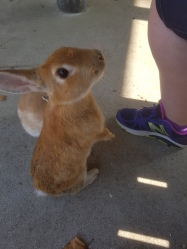 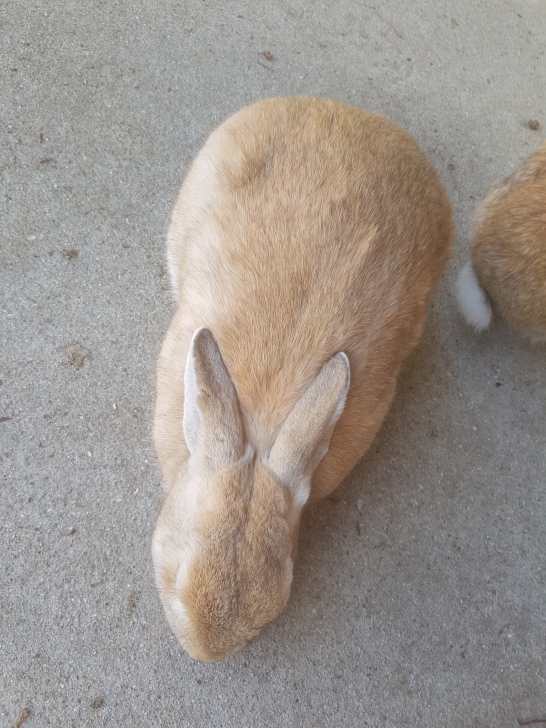 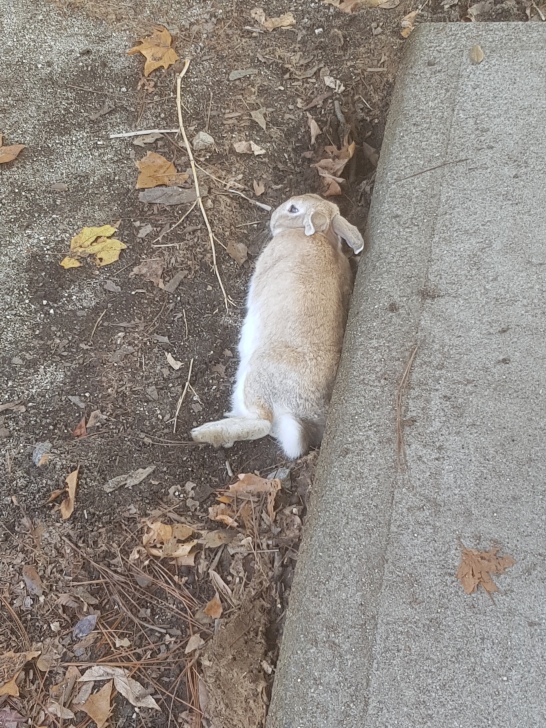 It was a hot day, and I learned that on hot days rabbits will dig a shallow hole and lay in it like it’s a dirt hammock. They will also seek out shade wherever it is. They will then sleep.

The bunnies generally wanted food, not pets, but if they lay down like a loaf of bread, like the one in the second to last picture above, they’d let you pat them. Their fur was super soft and the ears even more so. That one settled in for a good five minutes of pats from me and Anna before moving into their hole next to the concrete to cool down. Good bunny.

There were a ton of other people doing the same as us, including people who’d thought ahead and brought fresh greens and carrots. The bunnies loved that, you could see them munching on carrot sticks or bits of cabbage leaf very happily. They did still come over for rabbit pellets as well though. It was such a hot day I think a lot were sleeping or staying in the bush out of the sun. I know I’ve seen images of people swarmed with dozens of bunnies at a time, and I think that would’ve quickly got overwhelming for me. As it was, it was just a really nice bunny trip.

We stopped and had lunch at a picnic table and a bunny pushed past my leg, and it was like my cat rubbing by me. Somewhat startling but cute.

I had fun spotting the proper burrows as well. There’s a hotel on the island and there were some very large burrows near that. 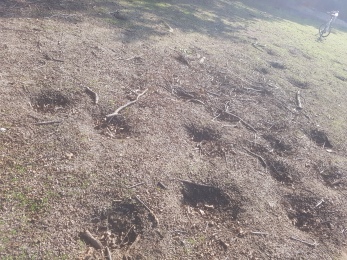 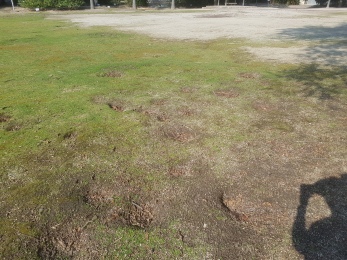 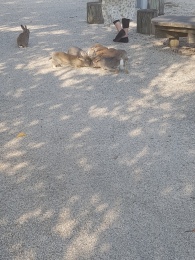 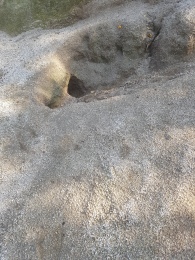 You just can’t quite get used to how many rabbits there are. I kept being surprised by it. 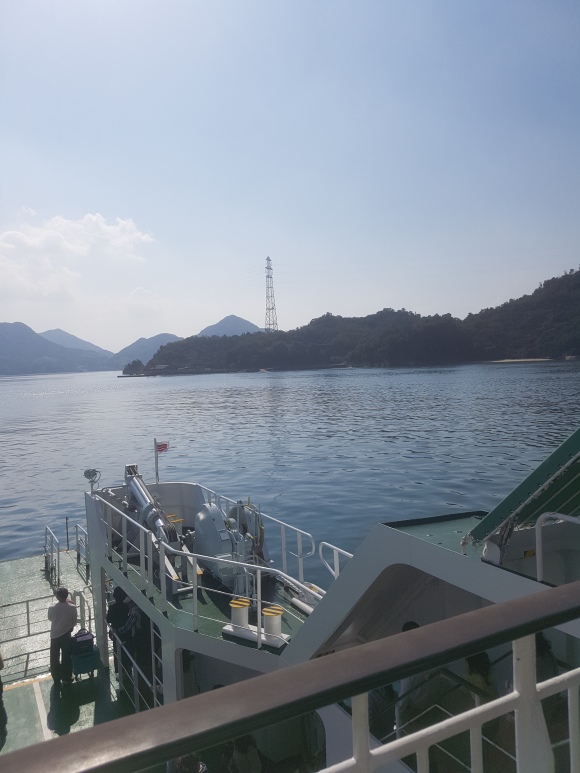 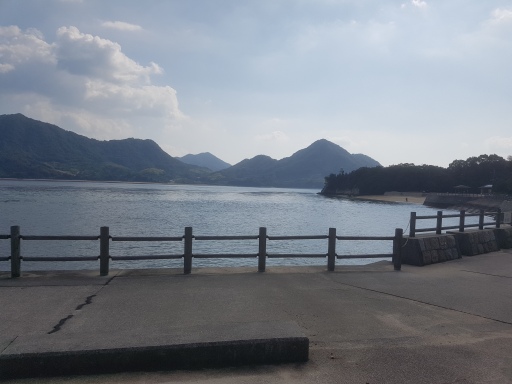 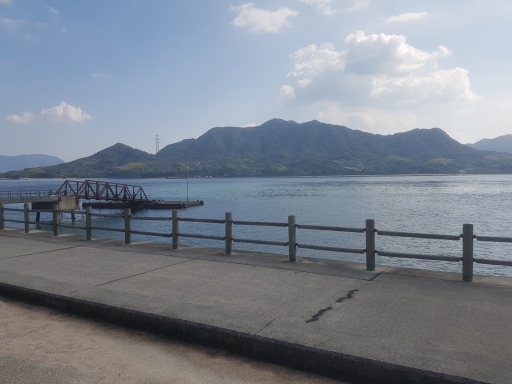 It’s also a really beautiful island. There’s a swimming beach and I think I’d quite enjoy staying at the hotel, but it’s definitely on the hard to get to side of things.

We got the ferry back to Tadanoumi and had to wait about 40 mins for the replacement bus (train line wasn’t running). There’s not much to do in Tadanoumi so it was one of those liminal times were you can’t really do anything but wait. Once we were on the bus it was easier, although again we had to wait a half hour for the next shinkansen back to Hiroshima. It made for a long day.

On the way back to the hotel we went wandering, I vaguely remembered there being bars and restaurants a block away from our hotel so we tried the first place advertising okonomiyaki we found. It was a little bar/restaurant called Ichiro and it was incredibly good. Also, long hot day, lots of travel and not enough hydration means beer goes to my head very fast.

Another early to bed night 🙂