Sleeping on a futon isn’t the most comfortable thing in the world. Thankfully I was so tired out, and the onsen had steamed me so well I mostly slept okay. I woke a couple of times, and when I woke in the morning there was no way I could lie that didn’t hurt some part of me, but I was generally rested.

We had the full Japanese traditional breakfast, again served in our room and again much too much food for me. It was really tasty, though. 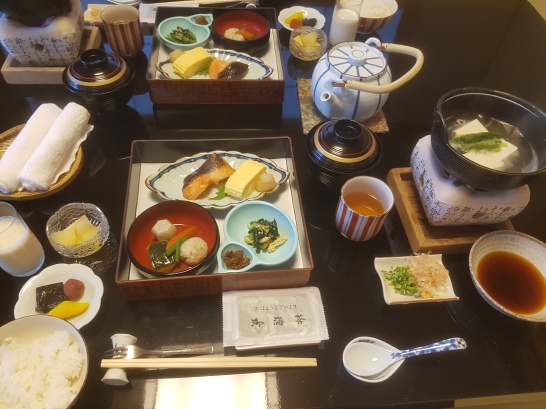 We had a little time before checkout so I got another chapter of my new novel written and then we left the ryokan to wander around Gion. We started with a walk around the Yasaka shrine gardens. 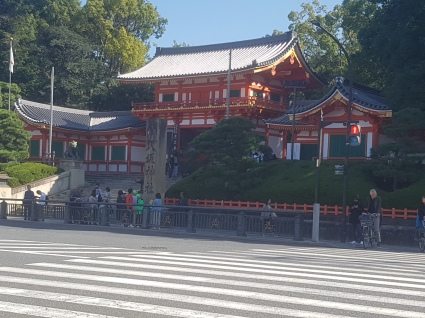 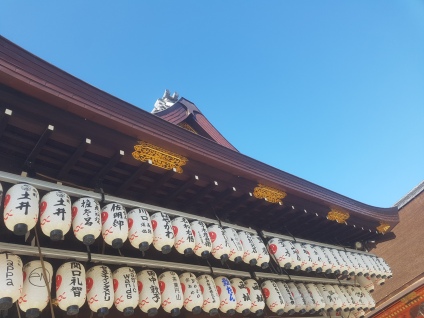 Yasaka shrine is really a huge complex, including street food, candy and tourist souvenir vendors even at ten in the morning. In spring it’s a huge destination for the cherry blossom viewing parties, but in autumn it’s not quite as busy.

Kyoto is a more old fashioned city, and you’re much more likely to see men and women of all ages in traditional dress – yukata, kimono, etc. It’s very picturesque. There’s also a lot of shops offering kimono rentals, including hair and make up for a price, but I feel pretty weird about using someone else’s culture for a photo opportunity.

Anyway, even that early in the day there were plenty of people at the shrine and in the gardens. Some of them in fancy kimono, taking photos at various spots. There was also a loud group of teenagers on a school trip, and when we stopped to take photos of the koi, three of the boys were pretending to shove each other into the water. I guess teenagers are kind of the same everywhere? 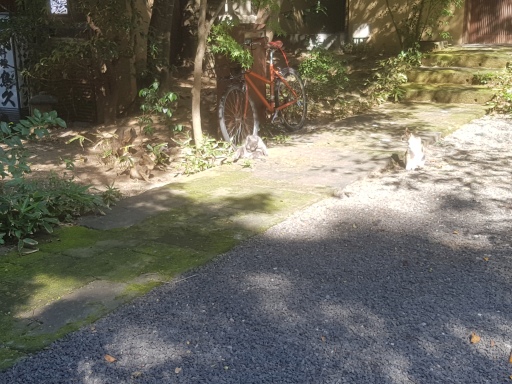 During our slow walk we discovered many shrine cats. It’s a sort of surprising thing to me that moving slower produces more detail, or hidden things like cats. If we’d power walked through the park and concentrated on getting to all the far corners of it we likely wouldn’t have seen any cats at all.

It was a very nice way to start the day. From there were wandered down the shady side of the street in the Gion district. Gion is historically Geisha central, full of salons and entertainment halls. Now it’s high end shopping, tea and dessert cafes and lots of tourists. We first stopped at Candy Show Time, which is a rock candy store where they make their own delicious looking treats. We bought some gifts for people back home and for ourselves.

We ended up at the Kyoto Pokemon Center where Anna got an amazing Gengar hoodie to match my Mimikyu one (photos to come). I also got a ‘precious wedding’ pikachu set, because if not now, then when would ever be appropriate?

That done we hit a few more stores and made our way back up to ryokan to collect our bags. We found the craft market place we liked last year, but the earring maker Anna had loved wasn’t there. I did end up buying a beautiful zodiac animals wall hanging, which is going to be – someone-‘s wedding gift to us. We just haven’t decided who yet.

Back at the ryokan they kindly summoned a taxi for us and we made our way to Hotel Aranvert, a nice hotel with big rooms and our home for two nights. They welcomed us in with wine for our honeymoon, and we collapsed on the beds to chill out.

After a couple of hours resting, Anna located a nearby sushi place with good ratings on google maps and we found ourselves in an unassuming restaurant on a corner a few blocks back from the main street. The little old lady running it had no English, but it didn’t matter. English menu, lots of pointing, and I understood enough that I got that she said the dish I’d ordered was delicious. I ordered Okayodon, which is a chicken and egg donburi. Basically rice with tasty stuff on top. It was indeed, oishii. Anna had hand rolled tuna sushi, which she enjoyed as well.

There was no one else at the restaurant the entire time we were there, but it was fantastic food, and cheap too.

The new hotel is mostly European styled, but it has a top floor onsen, so we went to try it out. Much bigger than the onsen in the ryokan, this one had about ten washing stations around a large hot pool. The women’s one is on the corner of the building, and there’s large picture windows looking out over the city. It’s very pretty, and one has to assume on the thirteenth floor that no one can see in, although a building over the road has pretty big windows…

The onsen was wonderful. I don’t know if it’s because of the bigger room, or if it just wasn’t quite as hot water, but it wasn’t as humid as the ryokan’s one, and I didn’t come out of it feeling totally wrecked. I did also rinse with cold water to finish off, which may have helped, too.

New beds not as comfortable as I’d like, but much more than the futon on the tatami mats.