We slept in today. In part because our room at our Nara hotel basically doesn’t have a window. I mean, it has a window, but its view is to the wall of the building next door and very little light comes in. Also Anna didn’t sleep well overnight, and needed as much rest as possible. We had a quick breakfast at our favourite, hit a post office for more stamps and went back to Nara Park.

Unlike Sunday when the deer were overfed and bored of people, today they were excited to see us and very, very keen for biscuits.

When they realised we had deer bikkies, they’d mob us. Some of the males would get quite rough, giving a butt with their horns or shoving against you. Some would bite at our t shirts or try and get in pockets in case there were bikkies there. My plushie Pooh Bear and Tigger from Disney which have been steadfastly hanging on my backpack since Disney got nibbled and deer slobbered.

We quickly learned that the deer understand that an open palm with spread fingers means ‘none left’. Even though I’m sure they could smell the bikkies in my backpack, they took the hint and would leave us alone if we made that gesture. (You can see Anna doing it if you scroll through the instagram photos above.)

Deer are such big animals that it did get a little scary when they’re all coming at you, especially when it’s the males with the new horns coming through, but we also loved it. The deer would put up with a bit of an ear rub or a neck scratch while you were eating, and most of them bow to you to ‘earn’ a biscuit, so that was neat too.

Once we’d spent a little more on deer biscuits than we intended to, we walked further through the park and tracked down the big bronze Buddha in Tōdai-ji, or the Eastern temple.

I find it really hard to grasp the age of ancient objects. We saw a lantern which dated back to the 8th century and I look at it and go ‘yep, that seems old’. Maybe it’s because I never studied classics or history, but it’s also in part I think because of growing up in New Zealand where stuff just isn’t that old. We don’t have the same history, we’re a very young country, especially in terms of human settlement.

Still I was happy to tourist it up in front of the house of the great Buddha.  Because I’m a nerd. 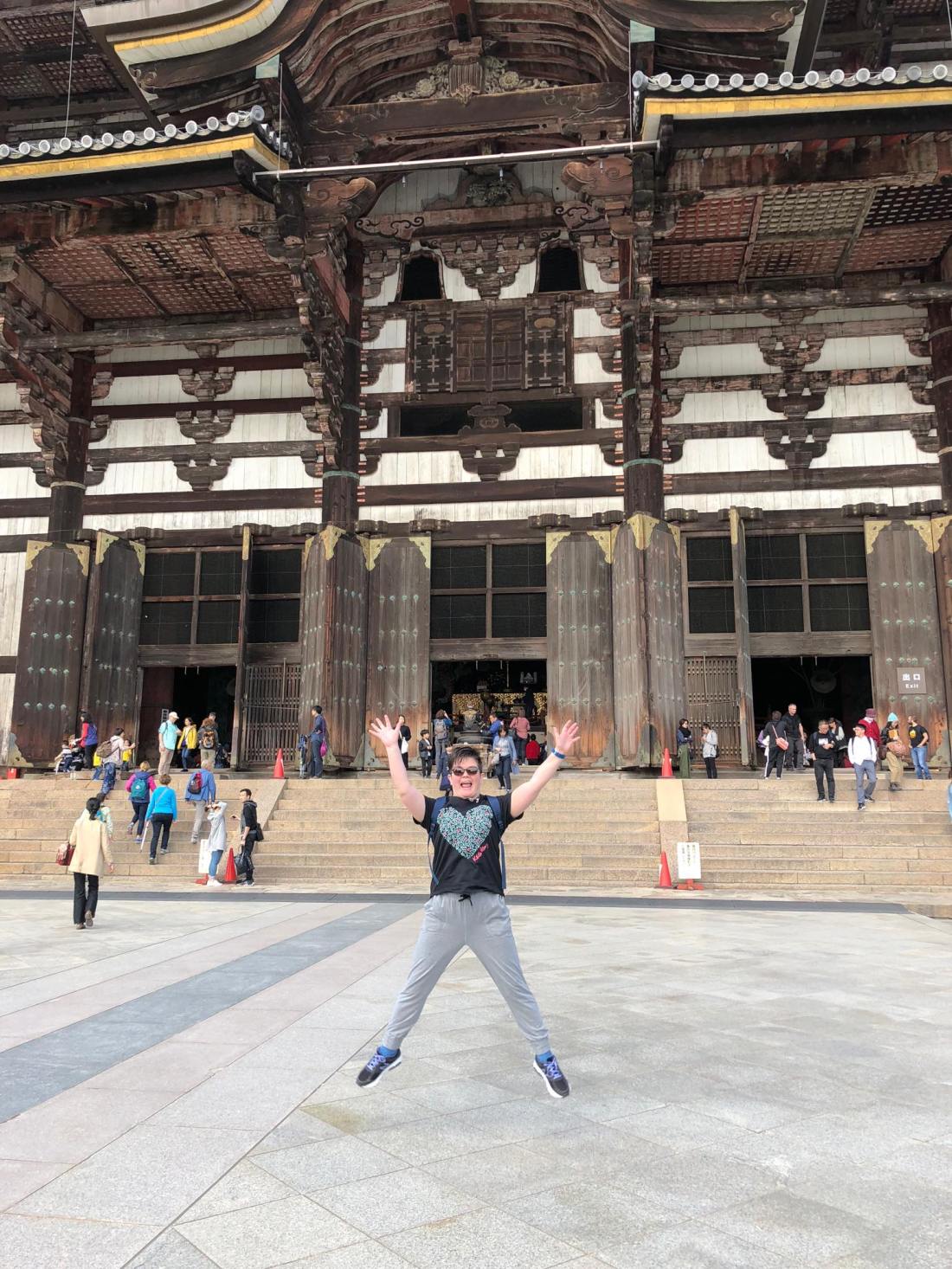 The Buddha was great though. I’m not religious, but I did feel a kind of awe, or desire to be quiet around him. Something like that. He’s very, very big. There were also some other really neat statues and stuff around, possibly of Gods? but the signs were all in Japanese so we weren’t sure what was what.

I was really glad to have done it, anyway. It was something new, and something Nara is known for besides the deer.

I bought a really great Nara t shirt on the way out too. We walked slowly back through the park and got another soft serve (I had mango and vanilla, it was delicious), and sat down next to an older lady who smiled and nodded when I asked if it was okay. She asked us a couple of the standard questions ‘where are you from?’ and then launched into ‘have you read the bible?’ and tried to sell us on … I dunno. She gave me a postcard with a bible verse on it in Kanji. There were a lot of Jehovah’s Witnesses around Nara for some reason, maybe she was one of those. Thankfully Anna saw her reaching for something else from her bag and suggested we needed to get going.

We went back to the hotel and rested for a couple hours, then went out for dinner to a place called The Terrazo opposite our hotel. It was Italian, and really really good. We had some beef and it was so tender and so good, and then a pasta main each.

After that we went to Karaoke for the first time in our trip, and it was amazing. The range of My Chemical Romance songs was off the chain.

(having some wifi patchiness so more photos to come)

One thought on “Day twenty-one – Nara”